Various national government agencies are collaborating for the preparation of the national network of farm-to-market roads (FMRs). In his first State of the Nation Address, President Ferdinand Marcos Jr., who is also the concurrent Secretary of Agriculture, directed the Department of Agriculture (DA) and Department of Public Works and Highways (DPWH) to prepare a national masterplan in support for key agricultural production areas throughout the country. In response to President Marcos’ directive, the DA through the Bureau of Agricultural and Fisheries Engineering (DA-BAFE) has organized the “Inter-Agency Workshop on the Formulation of National Network of FMRs” held at the Sugar Regulatory Administration from August 16 to 18, 2022.

In his opening remarks, DA-BAFE Director Ariodear Rico emphasized that FMR is a component of laws on agriculture and fisheries mechanization, specifically Section 4 of RA 8435 or the Agriculture and Fisheries Mechanization Act of 1997 which states that the network of FMRs are roads including local roads, provincial, municipal, and barangay roads and farm roads linking the agricultural and fisheries production sites, coastal landing points and post-harvest facilities to the market and arterial roads and highways. 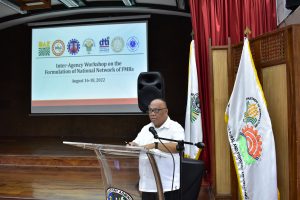 BAFE Director Ariodear Rico delivers his opening remarks for the three-day interagency workshop on the preparation of the national FMR network plan.

Production maps are almost complete with SAFDZs (Strategic Agriculture and Fisheries Development Zones), complement from BSWM. Mapping of FMR network is currently being done by DA RAEDs and submission of information/ shapefiles on markets, coastal landing points, and postharvest facilities will be overlaid to the production map after submission to DA-BAFE.

Furthermore, Director Rico stated that the purpose of the interagency workshop is to complete the FMR mapping, prioritization of FMR networks, funding requirements and sources, and the timeline of submission of the FMR masterplan to President Marcos Jr.

Meanwhile, Asst. Director Juana Tapel presented the action plans for the formulation of FMR network plan which serves as guidance for the workshop participants. Action Plan #1 is locating and mapping the agricultural and fishery production areas, coastal landing sites, postharvest facilities and markets. BAFE has conducted a meeting in the morning of August 8 with concerned DA agencies (PCA, BFAR, BAI, NFA and PhilFIDA), DA-AMAS and DTI. Another meeting with the same agenda was held in the afternoon with DILG, BSWM, and DA-PRDP. For the agreements during the said meeting, BFAR has agreed to provide inventory on fish landing centers, hatcheries and ports; DA-AMAS has provided data on trading posts    from the municipal to barangay level; NFA has provided data on their warehouses, rice mills, and dryers; DTI under logistics and food infrastructure inventory; SRA for their FMRs and sugar mills; PhilFIDA for fiber processing; and BSWM provided updated SAFDZ maps which serves as base map that were forwarded to DA Regional Offices for overlaying of proposed FMRs. DILG issued a memorandum directing its Regional Offices and LGUs for the status of roads in their respective areas. 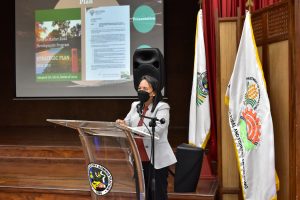 DA-BAFE Assistant Director Juana Tapel presents the rationale and expected output of the three-day inter-agency workshop on the preparation of the national FMR network plan.

Action Plan #2 pertains to the critical step of mapping FMR networks per province, district, city, municipality in agriculture and fisheries production areas, coastal landing sites, postharvest facilities and markets, with the inputs of seven national government agencies and the DA family. BAFE has organized a meeting with PRDP on data sharing and mapping arrangement. Last July 28, BAFE also conducted a meeting with concerned national agencies that will provide the needed data (maps and shapefiles) for the different roads funded under their agencies. DILG provided maps of local road conditions under the LRNDP. DTI and DOT will also provide their respective data (i.e. DOT has road projects supporting the tourism industry).

Action Plan #3 refers to the masterlisting of priority roads that have the greatest impact on agri-fisheries productivity. Once the universe for FMRDP has been established, roads that will be implemented from 2024 until 2028 will be identified. Last August 2 to 4, BAFE conducted a workshop for RAEDs to finalize the proposed FMRs that would connect agriculture and fisheries production areas to higher classification roads and eventually to the market.

Action Plan #4 is the estimation of funding requirements for the priority roads to be implemented in 2024 onwards.

Action Plan #5 is the crafting of Legislative Agenda for FMRs. BAFE is in the process of Crafting an Executive Order on the use of a portion of National Tax Allocation (NTA) to be used for FMRs. With the implementation of Mandanas Ruling, the share of taxes in LGUs will increase and it is expected that a portion of this will be utilized to finance FMR projects specially for maintenance and repair. A legislative bill for FMR is also being crafted to mainstream FMRs through a Republic Act, according to Asst. Dir. Tapel.

The workshop outputs were presented by each participating agency on August 17. Existing and on-going FMR projects will be overlaid in the network plan. NEDA considers infrastructure as one of the strategies under the Philippine Development Plan. DILG suggested to designate local government units (LGUs) as end-users in order to materialize the FMR projects. The network plan will be designed in a way that all agencies including LGUs will be able to access, provide input and update.

Proposed data sharing arrangement, synthesis and ways forward were presented during the closing of the workshop on August 18. The partnership among the concerned national agencies involved in the crafting of FMR network plan will be formalized through the issuance of a Joint Administrative Order (JAO). The JAO will focus on the implementation of the network of FMRs and will include the roles and responsibilities of each agency, data sharing, creation of technical working group (TWG) that will monitor the implementation of JAO, and criteria for prioritization. The initial framework will be finalized on August 31, 2022 and will be submitted to the DA Secretary. A workshop on Gap Analysis will be conducted on September 2022.  ###Marshall Louie Asis