𝐁𝐎𝐍𝐓𝐎𝐂, 𝐌𝐨𝐮𝐧𝐭𝐚𝐢𝐧 𝐏𝐫𝐨𝐯𝐢𝐧𝐜𝐞 – Local government officials in Mountain Province convened in an orientation meeting for the strengthening and establishment of agricultural and biosystems engineering (ABE) groups in the province and its municipalities held on August 10, 2022.
Governor Bonifacio Lacwasan Jr. welcomed delegates from the provincial and municipal government of Mountain Province and from the Bureau of Agricultural and Fisheries Engineering (DA-BAFE) during the opening ceremonies of the orientation meeting organized by the DA-CAR Regional Agricultural Engineering Division (RAED).
Gov. Lacwasan expressed support for strengthening or establishment of the ABE unit in Mountain Province and in each of its ten municipalities (Barlig, Bauko, Bontoc, Besao, Natonin, Paracelis, Sabangan, Sadanga, Sagada and Tadian) and for the creation of the engineer positions of the ABE units. 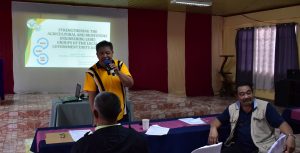 DA-CAR RAED Chief Engr. Filemon Salvador said that the orientation meeting is in line with the implementation of the DA-DBM-CSC-DILG Joint Memorandum Circular No. 2 series of 2020. The said joint memorandum circular (JMC) issued on June 24, 2020 provides local government officials (including provincial governors, city mayors, municipal mayors, members of the Sanggunian, local agricultural offices, local finance committees, and all other concerned national and local government officials) with the implementing guidelines on the strengthening and establishment of agricultural and biosystems engineering (ABE) groups of local government units (LGUs). Strengthening of ABE groups of the LGUs is embodied in RA 10601 or AFMech Law of 2013 and RA 10915 or the Philippine Agricultural and Biosystems Engineering Act of 2016 among other laws, Engr. Salvador explained.
According to Engr. Salvador, RAED-CAR has initially conducted a preliminary meeting in December 2020 with the Sangguniang Panlalawigan headed by Vice Governor Francis Tauli regarding the strengthening of ABE groups and the registration of ownership of agricultural and fishery machinery and equipment. As an offshoot of the meeting, an ordinance was crafted and submitted to DA-BAFE. Mountain Province is the second province in the Cordillera Administrative Region (CAR) where a LGU strengthening meeting has been conducted. The first was in Kalinga last March 18 to 19, 2022. 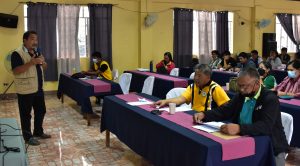 The provincial government of Mountain Province is in the process of publication of positions for the ABE units in compliance with JMC-02 series of 2022, according to Gov. Lacwasan.
The programs/activities/projects (PAPs) and the organizational structure, staffing pattern and plantilla positions of the Provincial Agriculture Office-ABE Unit were presented by Engr. Winston Beyden, ABE Unit Head of the Mountain Province Provincial Agriculture Office.
Meanwhile, the Provincial Devolution Transition Plan relative to agricultural mechanization and agricultural infrastructure was discussed by Mr. Daniel Likigan, Provincial planning and Development Coordinator.
Engineers from DA-BAFE (Engr. Emer Rose Asug and Engr. Maverick de Guzman) facilitated a discussion on the devolved functions, services and facilities based on Section 17 of RA 7160 and other laws to be assumed by the LGU ABE groups; delineation of functions among PLGU and MLGU; and capacity development programs.
Representatives from the ten municipal LGUs gave updates to DA-BAFE Director Ariodear Rico, attending via online platform, on the creation of ABE units and plantilla positions on their respective municipalities.
On August 11, 2022, an orientation and training on the registration of ownership of agricultural machinery was conducted by Engr. Maverick de Guzman of BAFE-SRED. He facilitated a discussion on the JMC on the Registration of Ownership of Agricultural and Fisheries Machinery and Equipment. After an open forum, a hands-on training on the use of RAFMES was conducted by Engr. Julius Simeon and Engr. Haskin Alinso of RAED-SRES. ###𝙈𝙖𝙧𝙨𝙝𝙖𝙡𝙡 𝙇𝙤𝙪𝙞𝙚 𝘼𝙨𝙞𝙨