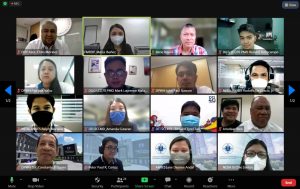 The Department of Agriculture – Bureau of Agricultural and Fisheries Engineering (BAFE) is mobilizing concerned national government agencies to finalize the integration and consolidation of farm-to-market road (FMR) projects towards a national network of FMRs. BAFE is seeking assistance on data sharing and convergence among national government agencies involved in the regulatory works and implementation of roads.

The Department of Agriculture issued Administrative Order 16 last June 2022 for the adoption and implementation of the Farm-to-Market Road Development (FMRDP) Strategic Plan 2022-2031. Don Mariano Marcos State University (DMMSU) was commissioned by BAFE to assist in the crafting of the strategic plan which is a product of consultation with stakeholders over the course of two years, according to Dir. Rico.

A copy of the FMRDP Strategic Plan was submitted by DA Undersecretary Leocadio Sebastian to President and concurrent Secretary of Agriculture Ferdinand Marcos Jr. for perusal, Dir. Rico added.

Prior to his State of the Nation Address (SONA), President Marcos has convened DA’s key officials in a meeting where Dir. Rico presented the FMRDP Strategic Plan.