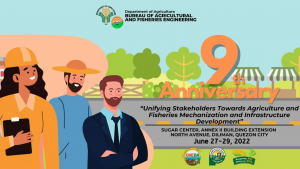 Invited to attend the Opening Ceremony on June 27 at the SRA Social Hall in Sugar Regulatory Administration, Quezon City are DA Secretary William Dar to give a keynote address and Usec. Waldo Carpio (Undersecretary for Special Concerns) to give an inspirational message.

BAFE Director Ariodear Rico will be presenting the BAFE Transition Report while Asst. Dir. Juana Tapel will lead the signing of the Pledge of Commitment in support of the National Agriculture and Fisheries Modernization and Industrialization Plan (NAFMIP, 2021-2031).

The anniversary theme centered on unity can be manifested by collaborating with other industry players – including agri-fishery machinery manufacturers and distributors, farmers’ and fisher folks’ groups, local government workers and officials, academe, and other marginalized sectors of society.

A series of webinars will be held on June 28 with topics on the Application of Digital Technologies for Competitive and Secure Rice Industry (Engr. Jasper Tallada of PhilRice), Smart Farming Technology in South Korea (Mr. Sanghun Lee of Agro Solutions Korea), Cold Chain Industry Roadmap of the Philippines (Ms. Raquel Echague of Board of Investment), Valuation of Agri-Fisheries Machinery and Infrastructure Projects (Department of Finance – Bureau of Local Government Finance), Testing and Evaluation of Agricultural and Fisheries Machinery (Engr. Arthur Fajardo of AMTEC), and Permit to Operate and Certificate of Conformity (Engr. Janice Vargas of BAFE-SRED). 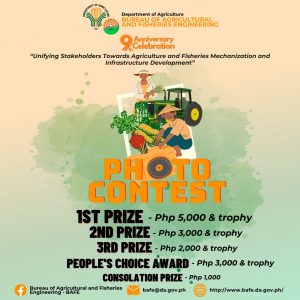