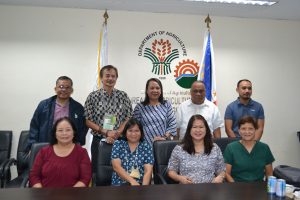 Department of Agriculture-Bureau of Agricultural and Fisheries Engineering (DA-BAFE) Director Ariodear Rico welcomed regional directors, key officials, and focal persons of the Philippine Fiber Industry Development Authority (PhilFIDA) led by Director Kennedy Costales during the opening of the two-day Orientation on Mechanization and Infrastructure on Fiber Areas held at the BAFE Conference Room, North Avenue, Quezon City from June 6 to 7, 2022.

“We at BAFE are very happy that we signed the memorandum of agreement with PhilFIDA that seeks to operationalize and implement the modernization of fiber industry to increase productivity of farmers,” said Dir. Rico in his opening remarks. A memorandum of agreement (MOA) was signed by BAFE and PhilFIDA last April 8, 2022 to formalize the collaboration between the two agencies for the provision of complementary engineering services and data sharing in agricultural machinery and infrastructure in fiber areas.

For his part, PhilFIDA Director Kennedy Costales presented their project relative to the Dual Tandem Fiber Extracting Machine. He showed a video presentation of the machine that will be utilized in Caramoran, Catanduanes which is a dual or two-in-one machine that can produce a decorticated fiber and at the same time the spindle-strip fiber. The machine consumes 10 liters of fuel per day, so the two machines used 20 liters to fully extract the fiber of an abaca stalk. The first cleaning is hand-stripped fiber which represents 92% of the industry.

Abaca farmers produce an average of 10 kilograms and maximum of 15 kilos per day. At the same time, the fiber quality is coarse that’s the reason why it is classified as 5th to 8th class fiber. The quality of fiber can be improved utilizing the two-in-one machine which can produce 80 to 130 kilos of fiber a day covering six to eight hectares in a year. Such machine cannot just be given to an individual farmer and the only way is to organize the farmers to form a cooperative or association to maximize its operation running 8 hours daily, said Dir. Costales.

Since time immemorial until the present, farmers extract only 40% of the fiber using the traditional manual method. However, farmers can extract 60% by using a decorticating machine, hence doubling their daily income. On the average, an abaca earns Php 500 for a whole day’s work, according to Dir. Costales.

Dir. Rico suggested to PhilFIDA to have a Training on Project Implementation and to have a discussion with the Philippine Council for Agriculture and Fisheries (PCAF) on the inter-regional monitoring of construction facilities. He likewise suggested that PhilFIDA’s Interim Fiber Engineering Division (IFED) should monitor all related construction on abaca infrastructure.

Meanwhile, Engr. Rodriguez of PhilFIDA stated that there are no existing guidelines for the decortication of abaca tuxy. She added that PhilFIDA already have an existing Building Committee in charge of the preparation of the design and specification of abaca machineries and infrastructure.

In response, Dir. Rico suggested to include the training on Contractors’ Performance Evaluation System (CPES) which will be led by the Standards Regulation and Enforcement Section (SRES) of IFED. Moreover, he suggested to train the focal persons of PhilFIDA Regional Offices. PhilFIDA must have a coordination meeting with the Department of Public Works and Highways (DPWH) in terms of constructing abaca-related facilities so that it can offer technical assistance, said Dir. Rico.

Both parties agreed to harmonize the existing process of PhilFIDA and BAFE-SRED in terms of machinery accreditation. 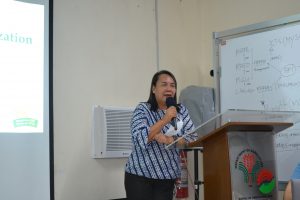 In her closing remarks, DA-BAFE Assistant Director Juana Tapel, PhD lauded the interest and enthusiasm of the participants in the orientation specially on the sharing of resources and expertise. She emphasized BAFE’s mandate of strengthening all agricultural and biosystems engineering (ABE) divisions of DA agencies as well as local government units. Asst. Dir. Tapel congratulated PhilFIDA led by Dir. Costales and expressed optimism for sustained engagement between the two agencies. “Hoping that our way forward will be implemented and will give us a fruitful engagement,” she concluded.  ###Marshall Louie Asis