Farm-to-market roads (FMRs) connect agricultural and fisheries areas to markets, allowing producers to transport their goods to traders and consumers with relative ease. These roads help the farmers and fisher folks gain better prices and broader reach for their products. FMRs also stimulate the economy and empower rural communities. Therefore, the creation of FMRs is an essential component of the government’s efforts to develop the countryside and achieve economic growth.

In consonance with RA 8435 (Agriculture and Fisheries Modernization Act of 1997) and RA 10601 (Agricultural and Fisheries Mechanization Law), the Department of Agriculture (DA) issued Administrative Order No. 5 and 28 Series of 2020 assigning the Bureau of Agricultural and Fisheries Engineering (BAFE) to spearhead the preparation of the Farm-to-Market Road Network Plan (FMRNP) and Comprehensive FMR National Master Plan 2020 to 2030, which will serve as the blueprint in rationalizing DA’s investments on FMR.

The budget for FMRs is provided for in the annual General Appropriations Act (GAA) with its trend of FMR budget it is only now that the FMRNP was created. The allocated fund is used for the construction, repair, rehabilitation, and road openings of FMR s in designated key production areas and is directly released to the Department of Public Works and Highways (DPWH) upon the recommendation of DA.

For this, DA-BAFE led by Director Ariodear Rico, Engr. Cristy Cecilia Polido and Engr. Arnel Tenorio teamed up with the Caraga State University to initiate network plans to provide guidelines for construction and rehabilitation of FMRs.

The Farm-to-Market Road Network Plan (FMRNP) was created to address all the issues and concerns. FMRNP is an investment plan and a systematic list of existing and proposed roads detailing their connectivity and links to agri-fishery production areas, processing plants and other infrastructure, trading posts, local markets, and agri-tourism sites with the local road network and national highways.

The FMRNP is supplementary to the Local Road Network Development Plan (LRNDP) of LGUs which maps the development of identified and prioritized road links for construction, rehabilitation, or improvement. It can be used as guidelines for other government entities implementing FMR projects. The main policy document used in the FMRNP is the DA Administrative Order (AO) No. 16 Series of 2020. The AO16 guidelines provide the selection and prioritization of FMRs for construction or rehabilitation.

Dr. Rowena Valera (CSU Vice President for Research, Innovation and Extension), on behalf of Dr. Anthony Penaso (CSU University President), led the momentous turn-over of the FMRNP to DA-BAFE in a ceremony held at the Almont Inland Resort, Butuan City on March 11, 2022. 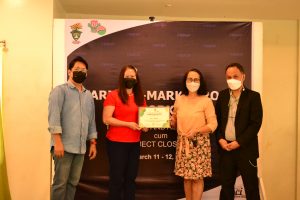 The Farm-to-Market Network Plan (FMRNP) is a very important and critical resource in the planning for sustainable cities and communities that help in the attainment of Sustainable Development Goal (SDG) #2 on Food Security, said Dr. Valera.

The completion of the FMRNP project is beneficial to every Filipino from Luzon, Visayas and Mindanao because the FMNRP ensures that the budget allocated by the government for FMRs will be optimally utilized for the development of the country’s agriculture and fisheries sector, Dr. Valera added.

Delivering his message via online platform, DA-BAFE Director Ariodear Rico expressed gratitude to the Caraga State University for helping develop the FMRNP. The preparation of the FMRNP has been in the Special Provisions of the General Appropriations Act (GAA) in 2012.  However, the FMRNP was realized when Director Rico assumed office in 2019 and through the initiative of BAFE staff in partnership with CSU. The FMRNP serves as an investment plan, rationalizes FMR investments, and operationalizes the national guidelines of the Farm-to-Market Road Development Program (FMRDP), Director Rico said. 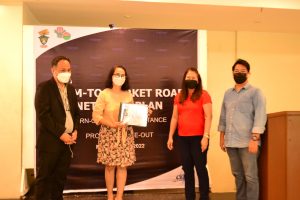 On behalf of DA-BAFE, Engr. Polido handed the Certificate of Acceptance to Dr. Varela, representing the Caraga State University, for having successfully completed the crafting of science-based Farm-to-Market Road Network Plan in the Philippines and submitted the necessary technical documentation.

Representing DA Usec. Waldo Carpio, his Chief-of-Staff, Atty. Arvin Manauis, delivered a statement of support and congratulated BAFE and CSU “for successfully developing the Farm-to-Market Road Network Plan and GEOAGRI web application,” which he described as “products of years of effort and hard work to introduce reforms in the pursuit of enhancing access to rural areas.” These projects will make the delivery of services and the flow of products across the value chain from the farms, to the market and the table of every Filipino more efficient, thus making food security and the availment of “Masaganang Ani, Mataas na Kita” for our farmers and fisher folks one step to reality.  These tools will enable DA to identify projects in key strategic areas under the FMRDP, he added.

In her closing remarks, Engr. Polido recalled that the discussion on FMRNP started in 2019 with DA-Caraga which is a pioneer among the regions in terms of spatial planning in roads and is catalytic in the formulation of FMRNP. Engr. Polido expressed satisfaction for BAFE’s collaboration with CSU. After several years, it is only now that finally there is a FMRNP which would be a subset of the Local Road Network Development Plan (LRNDP). Local Government Units (LGUs) and other national government agencies like the National Economic Development Authority (NEDA), DILG, DPWH were BAFE’s and CSU’s partners along the process of developing the FMRNP. The FMRNP and GEOAGRI will be one of the platforms for coordination among government agencies and LGUs. Engr. Polido said BAFE is looking at another fruitful collaboration with CSU so initiatives on the development of information systems would be sustained through continued technical assistance from CSU.

GEOAGRI, or Geographic Information System for Agricultural and Fisheries Machinery and Infrastructure, was developed by the CHCI of CSU to facilitate drafting the plan and data collection process. With GEOAGRI, the proponents enter the information of their FMR proposals into the system by selecting the proper responses to 20 indicators. It automates the process of computing and ranking proposals based on quantifiable and measurable inputs.

FMRNP through GEOAGRI will show the location of LGU’s proposed FMRs in the road network and its connectivity to markets and postharvest facilities. The FMRNP will be used by DA and other agencies and institutions that implement FMR projects as a guide in rationalizing and prioritizing FMRs, especially the allocation of funds through the General Appropriations Act (GAA).

FMRNP ensures the completeness of construction and connectivity of the production area and market. It also allows the systematic identification, prioritization, programming, and allocation of funds to all FMR projects. FMRNP will help eliminate project duplication or overlapping with other agencies implementing FMR. Comprehensive monitoring of the impacts of benefits from the constructed FMR is guaranteed. ###Marshall Louie Asis (published on March 23, 2022)