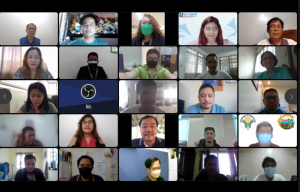 The Department of Agriculture – Bureau of Agricultural and Fisheries Engineering (DA-BAFE) organized a public consultation for the finalization of the Renewable Energy Program for the Agriculture and Fisheries Sector (REPAFS). The public consultation held online last January 28, 2022 was attended by officials and representatives of concerned government agencies, state universities and colleges (SUCs), as well as stakeholders from the private sector.

In his opening remarks, DA Usec. Ariel T. Cayanan said that the main objective of the REPAFS is to promote the use of cost efficient renewable energy (RE) sources such as solar, wind, hydro, small scale geothermal, and biomass for fuel and power generation to enhance productivity, environmental protection, and sustainable development.

Usec. Cayanan emphasized that it’s high time that renewable energy sources must not only be tapped for generating power and enhancing production, but for the broader purpose of protecting the environment as it is our basic moral obligation to the future generation of Filipinos.

Aligned to the OneDA Reform Agenda, the REPAFS serves as the blueprint in the effective implementation of renewable energy projects in the agriculture and fisheries sector.  It is also one of the components of the National Renewable Energy Program (NREP). REPAFS shall also form part of DA’s National Agriculture and Fishery Modernization and Industrialization Plan and the National Agri Fishery Mechanization Plan.

In August 2020, DA and DOE signed a Memorandum of Agreement (MOA) for the formulation and implementation of REPAFS. Through the REPAFS, all government efforts are harmonized together with the private sector heading to a clearer direction in implementing renewable energy projects in the agri fisheries sector.

Usec. Cayanan is hoping that this collaboration with the Department of Energy, Department of Science and Technology through the whole of the nation and government approach will promote convergence with other stakeholders and champions in the private sector. In the near future the government will expand its investment on the utilization of renewable energy for irrigation, drying facilities, milling, cooling and other postharvest operations, said Usec. Cayanan.

DA-BAFE, under the leadership of Director Ariodear C. Rico, supervises and oversees the Regional Agricultural Engineering Divisions (RAEDs) that plan and implement renewable energy projects in the regions.

DOE Undersecretary Felix William B. Fuentebella expressed that DOE is pleased to be working with DA and stakeholders in advancing the use of renewable energy in the agriculture and fisheries sector through the implementation of REPAFS.  Joint Memorandum Circular 2021-02-001 was issued designating DA-BAFE as the lead implementing agency of REPAFS.

On the other hand, DOE will provide technical expertise to DA roles in the implementation of REPAFS. DOE will also administer the accreditation and registration of manufacturers, fabricators, and suppliers of locally produced RE equipment and components for the agri fisheries sector in order to qualify for incentives under the Renewable Energy Act of 2008.

In addition, DOE will provide technical assistance in the application of different RE systems and technologies in agriculture, aquaculture, and agroindustrial processes, said Usec. Fuentebella.

Through the Renewable Energy Act of 2008, DOE will establish policy mechanisms, fiscal and non-fiscal incentives to encourage the private sector to invest in renewable energy projects including DOE’s Green Energy Option Program (GEOP), and Registration of RE Developers for lease to own arrangement in lieu of power purchase agreements.

The objectives and goals under six components of REPAFS were presented by Engr. Denver Camania of BAFE’s Programs and Projects Management Division (PPMD). By the end of 2030, REPAFS targets to implement 18,923 kWp of solar PV projects (17,843 kWp for SPIS and 1,080 kWp for solar PV power system), 273 units of ram pump irrigation system (RPIS), 421 units of wind-powered irrigation system (WPIS), 1,195 units of biomass dryers, and 3,369 cubic meters of biogas plants.

In her closing message, DA-BAFE Assistant Director Juana T. Tapel recognized the comments, suggestions, and recommendations of the participants of the public consultation to further enhance the REPAFS. “The consultation was interesting and engaging, everyone was given the chance to participate and provide their honest inputs,” said Asst. Dir. Tapel. She instructed the concerned BAFE staff to consider all the inputs for an enhanced and practical REPAFS program. “We must think outside of the box para ma-enhance ang programa natin,” concluded Asst. Dir. Tapel. ###𝙈𝙖𝙧𝙨𝙝𝙖𝙡𝙡 𝙇𝙤𝙪𝙞𝙚 𝘼𝙨𝙞𝙨 (𝐏𝐮𝐛𝐥𝐢𝐬𝐡𝐞𝐝 𝐨𝐧 𝐉𝐚𝐧𝐮𝐚𝐫𝐲 𝟑𝟏, 𝟐𝟎𝟐𝟐)