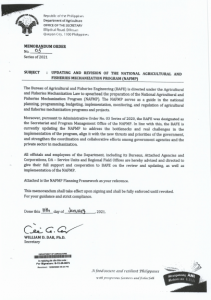 Agriculture Secretary William Dar has issued Memorandum Order No. 5, Series of 2021, a memorandum on the preparation of DA’s agri-fishery mechanization and infrastructure plan with the Bureau of Agricultural and Fisheries Engineering (DA-BAFE) as the lead agency in planning agricultural and fisheries infrastructure investments.

The memorandum states that BAFE is directed under RA 10601 (AFMech Law) to spearhead the preparation of the National Agricultural and Fisheries Mechanization Program (NAFMP) which serves as a guide in the national planning, programming, budgeting, implementation, monitoring, and regulation of agricultural and fisheries mechanization programs and projects.

Sec. Dar directed all officials and employees of DA, including its bureaus, attached agencies, and corporations, DA service units and regional field offices to extend their full support and cooperation to BAFE on the review, updating, and implementation of NAFMP.

BFAR is the implementing agency for project interventions, production mechanism, and regulation, while NFRDI serves as its R&D (research and development) arm. On the other hand PFDA, a quasi-government entity and corporation, is capable of engaging in big-ticket project implementation as well as public-private partnerships, stated Usec. Caballero.

A bill regarding a thirty-year infrastructure plan with BAFE as the focal agency tasked to consolidate inputs of concerned agencies is in progress, said DA-BAFE Director Ariodear Rico. DA-BAFE together with PFDA, both part of the Technical Working Group (TWG) on Food Infrastructure, are mapping the agri-fisheries infrastructure as a whole, he added.

Dir. Rico is hoping for a fruitful collaboration with the office of Usec, Caballero and fisheries agencies (BFAR, PFDA, and NFRDI) for fishery mechanization, infrastructure, and engineering concerns.

In line with the Agricultural Infrastructure bill, Dir. Rico requested BFAR Assistant Director Juan Albaladejo to submit a list of fisheries infrastructure that will be integrated in the proposed legislation to ensure availability of funding and support of the national government because those functions will be deregulated in the future.

DA-BAFE Assistant Director Juana Tapel recognized the value of having a centralized data repository of agri-fishery infrastructure. BAFE can share its ABEMIS with BFAR as well as other DA agencies to ensure ease of accessing data and information that are used by decision-makers. Having a singular reference such as ABEMIS will serve as source of data used as basis for planning, implementation, and monitoring among others. The Agricultural and Biosystems Engineering Management Information System or ABEMIS is an in-house online Management Information System (MIS) developed by DA-BAFE.

Usec. Caballero instructed Dir. Rico to consolidate all fisheries related data into one infrastructure (ABEMIS) and include inputs from BFAR, NFRDI, and PFDA. It is important to understand the actions of BFAR’s IT team and how data are fed to decision-makers in terms of using data as a decision-tool.

DA-BAFE is heading towards the correct direction because the agency sees the management information system in the context of infrastructure investments while ensuring that investments are anchored on DA’s priorities and transparent in implementation and monitoring, she disclosed.

Usec. Caballero commended DA-BAFE Dir. Rico and Asst. Dir. Tapel for “putting governance mechanism into proper structure” and the ABEMIS team for constantly upgrading and updating the system. Transparency and collaboration can be attained by visual appreciation supported with a database. This collaboration will go a long way because the private-sector would know where to invest.###BAFE Media Group